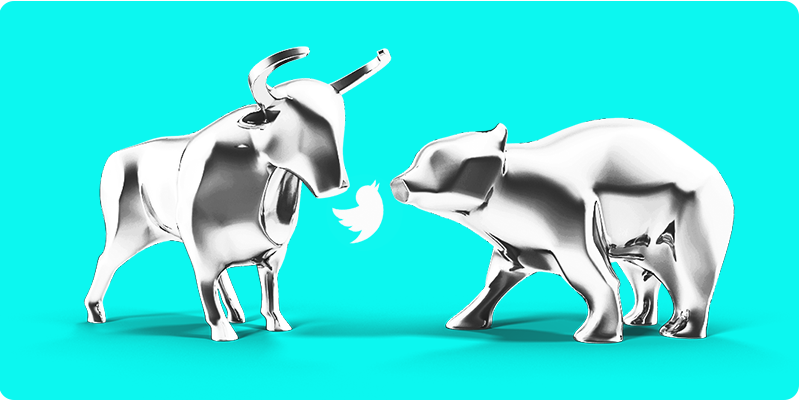 I mean, what if true news went viral and then got edited into fake news? That’s a problem not just for feed scrollers but also for sharers and commentators on the platform. As far as investors are concerned, the stock only gets more interesting as the business says “no” to its customers.

The shares have been a value trap for years. They have real, parabolic potential, but Mark Zuckerberg summed it up perfectly when he called Twitter a “mess, as if they drove a clown car into a gold mine and fell in.” The app needs to be monetized more aggressively.

The market used to compare Jack Dorsey running Twitter and Square to Steve Jobs, running Apple and Pixar, but matching patterns have let investors down. The product has stalled. Push came to shove at the start of this year with activist investors rolling in.

Silver Lake and Elliot Management have bought enough shares to control the board, to control @jack, and set about immediate change. They’ll be no more free-riding brands getting everything for nothing, at least not one day.

Twitter+, Twitter Pro, Twitter ‘Premium’? There are power users who would have no choice but to subscribe to these ideas that investors desperately want implementing. Twitter Pro has a nice ring to it. @jack even mentioned tipping models recently. Change is afoot!

The bear case still stands, though. Twitter uses the short-form text primitive, video belonging to Insta and TikTok. Twitter’s short-form text needs to be compelling if the app is worth using. It needs creating from great minds, not just consuming.

The mass market is not filled with great minds, and at least if someone shares what they had for breakfast on Facebook, that someone is probably a friend, giving the information some relevance and interesting context. On Twitter? Nay!

We’re sitting on the fence for this one, but post your take to the Invstr Feed. We want to hear it! Also, don’t forget your free trades by answering our poll on the subject; ‘what social media platform do you use the most?’

I am not a financial advisor and my comments should never be taken as financial advice. Investments come with risk, so always do your research and analysis beforehand!”