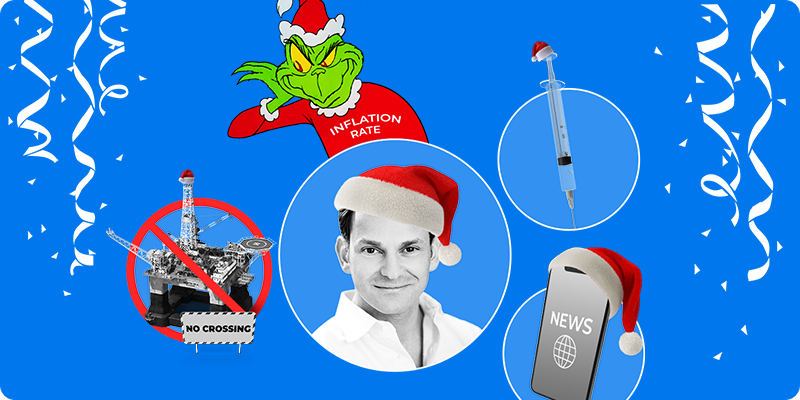 Three Reasons to Be Joyful in 2021. (And One Thing to Worry About).

For full disclosure, I am naturally an optimistic person. I believe in people. I believe in our collective capacity to adapt and overcome obstacles. I believe that when we bring together empowered and diverse people to collaborate around a common goal, we can achieve amazing results – results that far surpass those that we could have achieved on our own. Empowerment, diversity, and collaboration are the values that drive and inspire us at Invstr as we seek to enable everyone to take charge of their financial future.

That said, 2020 was not an easy year. For many, it has been a terrible year. And yet, when I look ahead to 2021, there are three things that make me optimistic about the future:

Starting in about 1995, the emergence of the public internet fundamentally changed our relationship with information. For the first time in human history, we were able to directly access information on an unprecedented scale. For millennia, intermediaries like religions, governments, political parties, media, companies, banks and universities controlled our access to information. Through information, they controlled us. Direct access to information has begun to liberate us from their control and empower us all as individuals. We believe that is an irreversible trend.

Starting in about 2005, social media gave us access to each other. The sharing economy, from 2015 onwards, made us independent economic agents. And blockchain promises to enable us to collaborate and trade trustlessly all around the world.

There are issues to overcome with all aspects of the Information Revolution – moral, social, political, economic, and technological issues. But the upshot will be a massive and enduring rise in human productivity and hopefully human well-being.

Traditionally, vaccines take years if not decades to research and develop. In 2020, we have witnessed not one, but multiple vaccines produced all around the world, not in decades but in months. The first from Pfizer BioNTech witnessed Turks, Germans and 58 other nationalities collaborating to produce a vaccine in record time. Others have followed from the UK, USA, Russia, and China.

The Covid vaccine produced by BioNtech was an offshoot of medical research into personalized cancer treatment. The advances that scientists are making in diagnosing and fighting disease, in preventive and curative technologies, are leading to remarkable gains in longevity. Again, much work lies ahead, but real progress is being made. As Eric Schmidt once remarked, the first immortal human has probably already been born.

Imagine a world with unlimited, free, non-polluting energy. For humans, energy is the difference between life and death. For most productive processes, energy is an essential ingredient. And in an increasingly digital world, the most critical component.

Nuclear fusion, which uses hydrogen and oxygen to create energy, could lead to free, pollution-free energy. Already scientists in China are reportedly at 85% energy re-capture. That is to say that they get back 85% of the energy that goes into creating one unit of new energy. Once we are able to surpass 100% energy re-capture, we achieve limitless energy at almost zero marginal cost.

Highly productive people, with access to limitless, free, non-polluting energy for their immortal lives. Are those not reasons to be optimistic about our future? For an investor, those are things to give us confidence and provide signposts as to where we should be directing our investment strategies.

What could go wrong?

Investors value things that make their assets worth more – population gains that lead to greater demand and greater growth; productivity gains that give us greater output for the same amount of input; compounding that makes everything grow arithmetically over time with no additional effort.

What could drive inflation and interest rates higher?

Central banks have increased the total supply of money accumulated over centuries by 20% in a single year. Unlike the previous crisis of 2008/2009, the money that they have ‘printed’ has not stayed in the financial system, therefore driving financial asset prices higher. It has been dispersed to all of us. It is in the real economy, chasing the same amount of goods that existed before. The result is usually higher prices.

De-globalization, following populist politics and a slowdown in demographic trends, mean that it is harder for companies to exploit labour price differences in different parts of the world to drive prices lower. If they have to pay someone more locally to produce what was produced more cheaply abroad, prices will go up.

As a human being, I am an optimist. I believe in our future. The three revolutions discussed above are powerful forces that will survive no matter what. As an investor, it pays to think about what could go wrong and then celebrate when it doesn’t.

Happy New Year and wishing you a joyful 2021!