All eyes on the Capitol
Yesterday the US Senate approved the biggest US tax overhaul in 30 years, with a final tally of 51 votes to 48 in favor of the Republican party.

Due to procedural issues another vote later will take place on Wednesday, but it is still considered as a step closer to the implementation of a major U.S. tax overhaul. A bill is expected to land on Donald Trump’s desk this week.

The Tax Policy Centre, a non partisan think-tank in Washington, estimated the bill will mean middle-income households see an average tax cut of $900 next year, while the wealthiest 1% of Americans will see their tax bill drop by $51,000. Despite some clear advantages, not a single Democrat voted in favour of the bill, citing it would provide “permanent giveaways for big banks and corporations” (the words of Democrat Senator Chris Van Hollen) as well as increasing the future debt burden on generations to come.

Republicans refute these statements believing the bill will pay for itself by spurring economic growth, though even Steven Mnuchin’s Treasury department had to wind back on that assertion.

The bill also removes the individual mandate from Barack Obama’s healthcare reforms, which insisted that individuals have insurance or pay fines.

US stock futures pointed to a higher open today, and sure enough stocks moved higher at the open as investors awaited the final legislative action on the tax bill. We will now see whether all of the hype has already been ‘priced in’ to the market.

Craig Erlam, senior market analyst at trading and FX service OANDA said in a note: “With equity markets having risen more than 25% since Trump’s election victory, at least in part due to his tax reform plans, it’s likely that this is almost entirely priced in at this point so it will be interesting to see whether the rally can now be maintained until the end of the year, or whether the rally will instead grind to a halt as investors lock in some profits.”

Today some of the top movers included FedEx which advanced over 3% before the bell thanks to Q2 results that topped expectations, Micron Technology by over 4% thanks to improved earnings too, and surprisingly General Mills is also rising in early trading thanks to reporting ubeat revenues, despite the stock being on a downward trend all year.

Wells Fargo analysts believe General Mills is set to perform better in future, thanks to ‘fewer structural headwinds’ and innovation that will lead to stronger sales growth. They set a price target of $63, representing 11% upside potential.

Back onto tax reform – and analysts believe bank stocks are set to benefit substantially from the bill. Is it time to buy in?

John P. Reese wrote for Forbes Magazine, “For banks, which typically receive a healthy tax bill (according to estimates from KBW Research), a decrease in the corporate tax rate to 20% would result in a similar percentage boost to profits for firms such as JPMorgan Chase, Wells Fargo and Bank of America.”

“The financial sector is also poised to benefit as companies look to deposit repatriated cash and/or put it to use, thus bolstering M&A activity. Tax reform could also lead to higher interest rates, which would translate into improved profitability for banks.”

See the chart below for the 2017 stock performance of the big names in American banking. 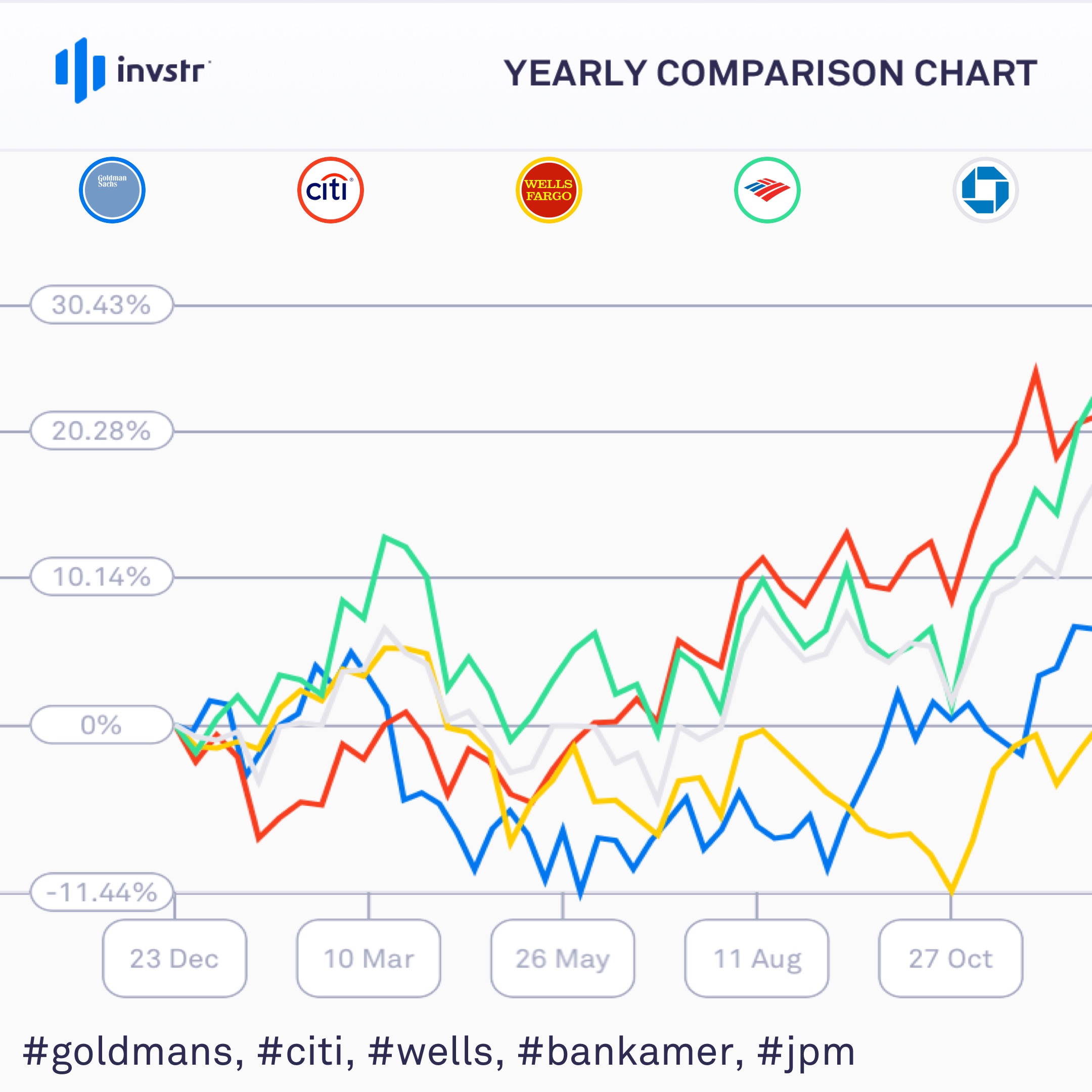