Financial shares pulled back today while oil & gas stocks got a rise, thanks to a spike in the price of Brent Crude oil overnight. The price rose after the closure of the major North Sea Forties pipeline, after a small crack was discovered in it.

The Forties pipeline is set to close for weeks, which is expected to cause several oil companies to temporarily cease production. The rise in Brent means that oil prices are currently at their highest level for more than 2 years. The pipeline carries around 40% of North Sea crude oil, but the pipeline’s owner Ineos said that the big impact would be on the industry and not on consumers.

Elsewhere in the markets, bank stocks across Europe including France’s SocGen and BNP Paribas, as well as Germany’s Deutschebank and Commerzbank all fell today, after the rally in financials from yesterday lost steam.

In other corporate headlines, while mergers and acquisitions have been slowing across developed markets this year, Malaysia heavily bucked the trend.

The IMF showed its confidence in the developing economy too, predicting a growth rate of between 5% and 5.5% next year, driven by domestic demand and robust exports. Strong demand for electronics around the world has been one of the key drivers of Malaysian export growth.

Multinational services firm Ernst & Young predict that merger activity is set to slow more across the world in 2018, compared to the overheated speed of corporate activity in the last 2 years. That’s according to EY’s Capital Confidence Barometer, based on a survey of US executives, released in late October 2017, in which only 42% of those execs surveyed said they planned to pursue a major deal, down from 70% in recent years.

A Chorus of Criticism on Tax Reform

Nobel prize winning economist Joseph Stiglitz has not been shy in detailing his skepticism of the Republican tax bill. Speaking to Bloomberg television this week, Stiglitz called the tax bill the “worst tax bill I’ve ever seen in my lifetime.”

The economist and professor said, “If you go back to 1986 when Reagan had a tax reform, it was very well thought out, I disagreed with many provisions in it, but they wrote down a blueprint of tax reform, they had argued among experts about the details and then they adopted it.”

On the new Republican plan he said, “This is going just the wrong way, there is no blueprint. It is, what I would say, the corporate special interests feeding at the trough, and you wind up with a tax bill that raises taxes on a majority of citizens, to pay for a tax cut on large corporations and the billionaires, at a time when a major issue is inequality.”

His words came at the same time that European finance ministers allegedly wrote a letter to US Treasury Secretary Steven Mnuchin, imploring him to rethink Republican plans for tax cuts, according to City A.M.

Goldman Bullish on Commodities for 2018

Major US bank Goldman Sachs is more bullish on raw materials than other assets for next year, predicting 10% returns for the asset class in 2018.

Goldman analysts wrote, “Given that equities are supported by robust views around future growth, should these views falter even as current activity remains robust, commodities should outperform equities and other asset classes, reinforcing our overweight view.”

In terms of individual forecasts in the metals market, Goldman is most bullish on copper and most bearish on aluminium. Analysts said, “In both cases robust and synchronous global growth will help to keep metals demand strong across the board in 2018,” the bank said. “The difference lies in the supply dynamics.”

With a Chinese economy in rude health, this will likely keep demand for materials high as the government continues to invest in infrastructure projects, while Trump may also begin work on a major infrastructure package for America next year too.

The Bloomberg Commodity Index, which tracks 22 commodity futures contracts, was down over 7.5% in June this year, but then went onto rise by around 6% since the second half of that month, on signs of tighter supply and higher levels of demand for several different materials ranging from cotton to crude oil.

The chart below shows the price changes for key metals and Brent Crude throughout 2017. Returns for Gold, Copper and Zinc have been impressive, while oil looks to be making a resurgence thanks to OPEC’s commitment to cuts. 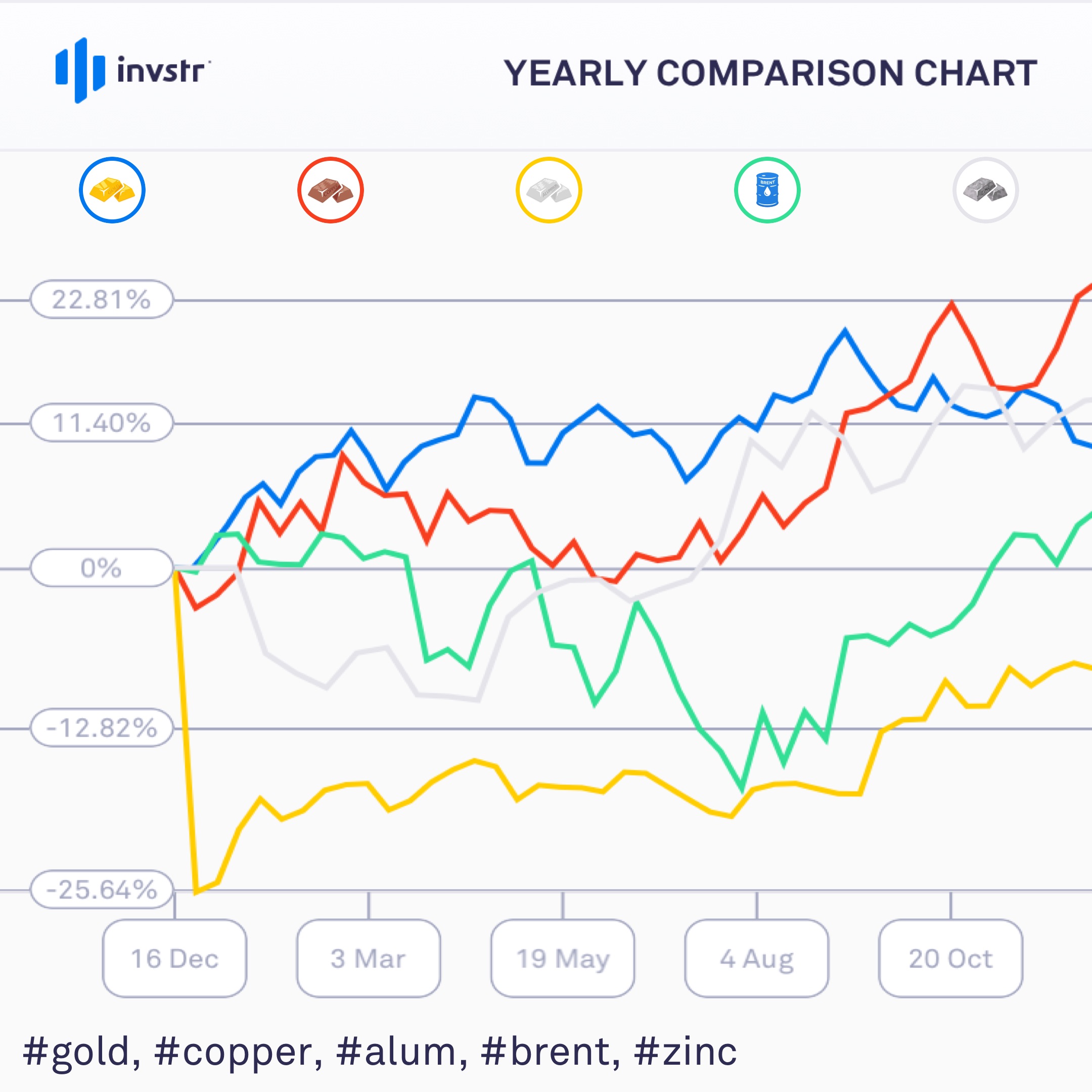