Speaking of European stocks, MarketWatch reported today that major US banks are bullish on European equities, with Citigroup leading the charge. In their year-ahead report, Citi said,  “The euro area is enjoying a period of robust and above-trend synchronized growth, across both geography and industry.”

Citi forecasts a 17% rally for the Stoxx Europe 600 next year (the index represents large, mid and small capitalization companies across 17 countries of the European region and is owned by Deutsche Börse Group). They also expect a pickup in investment, facilitated by more bank lending across the region.

In Asia this Thursday, the NIFTY50, Shanghai SSE Composite, FTSE Hong Kong and TOPIX all enjoyed gains – the NIFTY in particular has had a great week so far. It topped out at 10,484.85 yesterday, keeping it on track to hit the 10,500 points mark, which will be its highest ever.

Trading volumes will be getting thinner and thinner as we head into the Christmas break.

The price of Brent Crude oil fell after the operator of Britain’s Forties pipeline in the North Sea announced it was expected to restart as soon as January thanks to repairs coming over Christmas. Brent Crude sits at $64.37 a barrel, off from highs of over $65 this month (the highest all year).

Oil prices had been supported above the $65 level by the closure of the pipeline as well as falling crude inventories in the US, but capped by output that is fast approaching 10 million barrels a day, a level similar to Saudi Arabia and Russia, who both agreed to further output cuts for 2018.

Metals prices have been on the up and up this week too.

Bryan Keane, a Deutschebank analyst, reiterated a ‘buy’ rating on Accenture plc ahead of the new report today. Accenture wrapped up fiscal 2017 on a strong note growing sales be 6%, expanding its gross margins. Shares are considered to be undervalued by other analysts watching the stock. Accenture shares added just over 3.5% in Thursday’s pre-market deals after the consultancy group revealed better than expected financials for the first quarter.

Nike shares have performed well in recent months but it has been a volatile year overall (see the chart below). It still leads the market by a huge margin with a market cap of over $103 billion, despite increasing competition from rival firms like Adidas and Under Armour. Adidas has capitalized on a renewed interest in retro and casual athletic apparel and footwear which could undermine Nike sales further in future.

Nike has shown some weakness in the North American market, but international business now accounts for over 55% of its revenue, and there’s much more opportunity ahead in developing markets, with a focus on China in particular.

Note – please conduct your own research on a stock before trading. Company results can make shares more volatile.

Today we are watching: #nike #accent 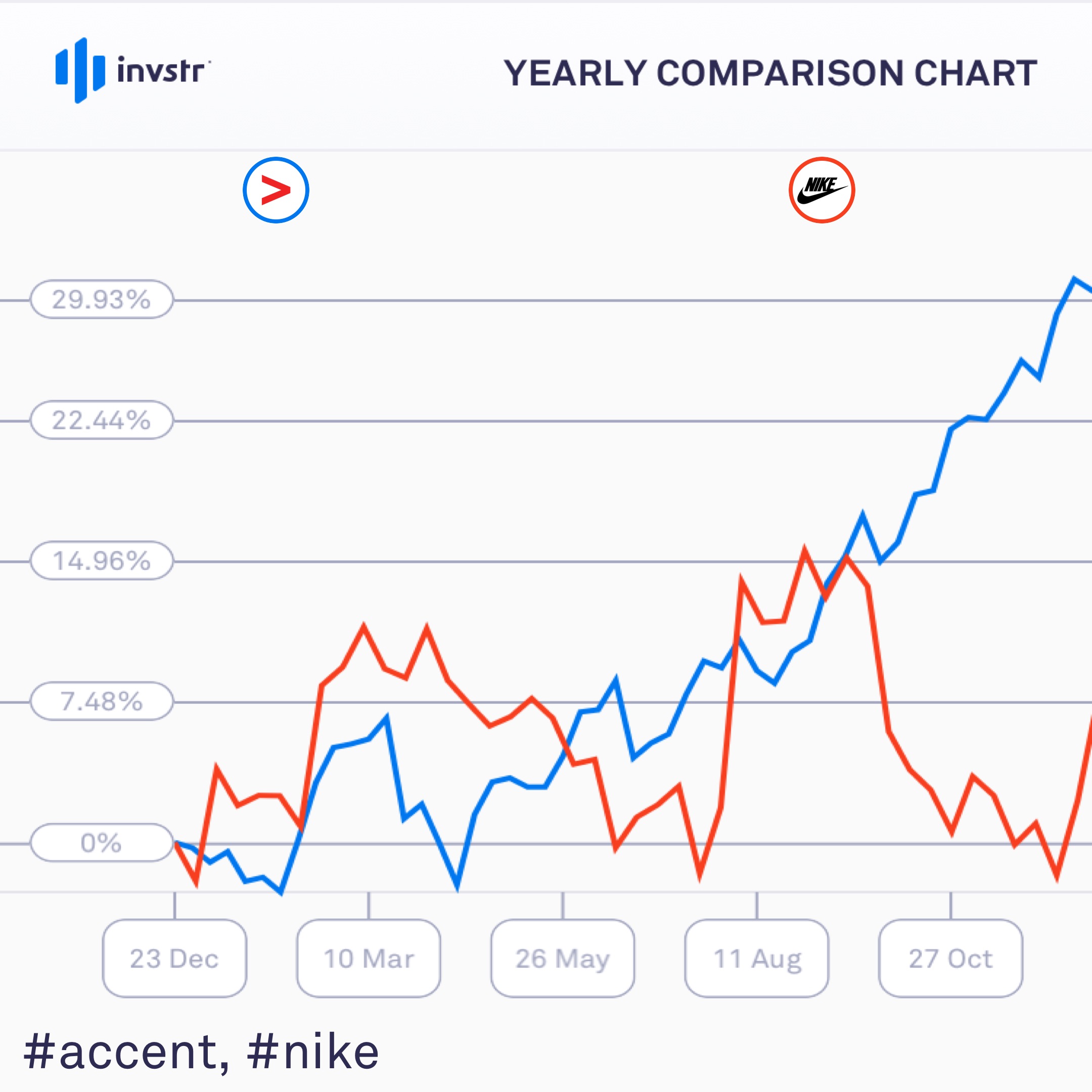