Bitcoin investors will have had a shock today. In the first major reversal for some weeks, the price of a single coin against the US Dollar slid dramatically – down to $12,201 at its lowest overnight!

If it continues, it will be a far less merry Christmas for Bitcoin holders, who have become accustomed to huge gains in short periods of time.

The crash finishes off a volatile week of trading after the cryptocurrency peaked at an all-time high on Sunday at $19,666, having started the year at $1,000, fuelling fears of a major bubble in the asset class.

Is a collapse imminent? It is certainly not guaranteed. Earlier in the year, the price crashed in a dramatic fashion after China’s government moved to ban initial coin offerings as well as banning all cryptocurrency exchanges from operating in the country. With major fears of further government intervention looming, the price headed into a bearish pattern, moving nearer to the $3000 mark for some time after Beijing’s announcement, however this reversed in time and shot above $4000.

That change in value might seem like nothing compared to the astronomical levels of volatility in the asset which were to come later in the year, but at the time there were major fears of a collapse in the price. This example shows that Bitcoin has the ability to keep rising despite major upsets, and so perhaps it is not time to write it off amidst the current correction in the runup to Christmas. 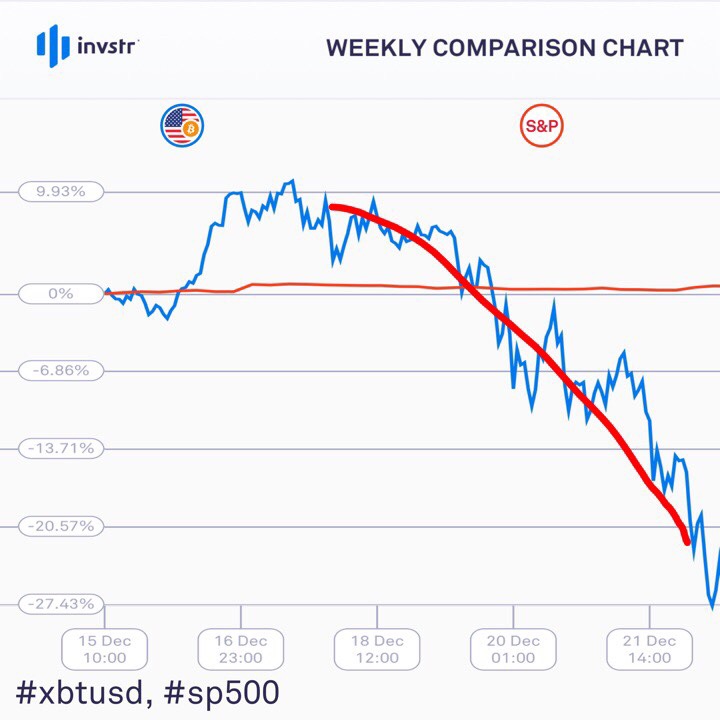 Invstr is a technology platform, not a registered broker-dealer or investment adviser. Invstr does not offer its own recommendations of any security or provide its own research to any user regarding any security transaction or order.
Please note, investing involves risk and investments may lose value. Past performance does not guarantee future results.
Brokerage services are provided by the following:
US traded securities, including fractional trading, are provided to Invstr users by DriveWealth LLC, a regulated member of FINRA/SIPC. DriveWealth may not establish investment accounts to residents of certain jurisdictions. For more information, including disclaimers, risk and transaction fees click here.
India account traded securities are provided by SIC Stocks & Services PVT Ltd. SIC does not make any personal recommendations to buy, sell or otherwise deal in investments. Investors make their own investment decisions. The services and securities provided by SIC may not be suitable for all customers and, if you have any doubts, you should seek advice from an independent financial adviser. For more information and disclaimers, click here
Cryptocurrency trading is provided by Coinbase. To be eligible to use the Coinbase Services you must be at least 18 years old. Your eligibility to access certain Coinbase Services also depends on the country in which you reside. For more information on eligibility of use and disclaimers go to Coinbase, or click here