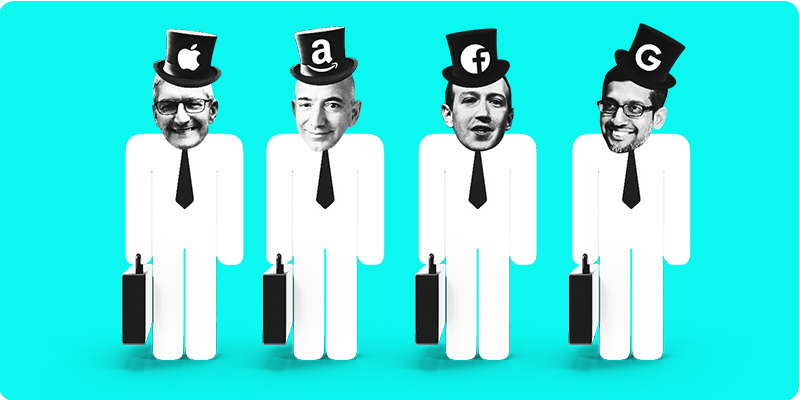 Big Tech and Capitol Hill. We’ve been here before; Bezos, Zuckerberg, Pichai, and Cook, trying to convince the government they don’t have monopolies. It’s every tech startup’s dream to attend one of these wonderful events to dodge easy questions and promote ESG!

The billionaires did their best to parry wave after wave of congressional “attack” on their market positions, as investors would see regulation on these tech giants if the antitrust bods deemed them too dominant, or a breakup if things got really bad.

Jeff Bezos went up first, emphasizing the story of him being born under wedlock; an adoptive father; starting an online bookstore in his garage; getting the idea while working “somewhere near” Wall Street; and now defending what’s he built from the fearsome Walmart!

Mark Zuckerberg was next, but he’s a seasoned pro. This is like F8 to him. He promoted Facebook as a social network connecting people around the world (the American electorate with the Russians, you mean?), and the USA’s answer to China’s Tiktok, where it’s barred.

Sundar Pichai came to the defense of Google with some generic story about growing up in India with no computers, and Apple boss Tim Cook talked about the App Store creating two million jobs. Google’s been engaging in anticompetitive behavior for years, and you can’t have Apple software without Apple hardware, so there are big antitrust issues with these two.

We can mock, but the antitrust panel is important. We don’t want regulation, because it usually makes the user experience worse, and we shouldn’t need regulation, because companies should be able to pounce on weaknesses in other competitors to usurp them.

However, the questioning to understand what weaknesses lie where, is awful. It’s nuts these cutting edge tech firms have to defend themselves from senior politicians who’re still learning what email is. We need to do something about the dog and pony shows these hearings have become. If and when that happens, investors will be the Kings of Capitol Hill.